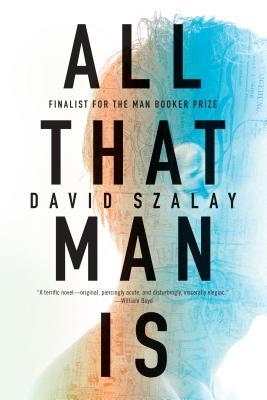 One of my all-time favorite music albums is I’m Only a Man by the post-hardcore band Emery. Emery’s third album, released in 2007, is largely based on a theme, revolving around the excuse of “I’m only a man.” While many fans of the band declare this album their worst (I acknowledge it has one or two duds), I’ve always felt it was their best; it was an album where emotions were ripped apart and vulnerability was put on display.

I thought about Emery’s album often while reading David Szalay’s All That Man Is. The men in this collection of stories are unapologetic, insufferable brutes. Initially, this angered me. Was every man in this collection going to be framed by a stereotype of what it “means” to be a man? But I thought of I’m Only a Man, recalled how many of the songs on the album are from the man’s perspective, and how little optimism there is in that album. Szalay is not necessarily saying this is “all that man is,” but merely tackling a theme that is certainly relevant. Still, it was brutal, and this brutality is probably what made this book so affecting.

As a Man Booker nominee, I didn’t expect All That Man Is to be a collection of stories. Generally, the Prize avoids collections and there was no mention on the book itself that it was anything but a novel. In fact, it seems some regard it as a “novel with an overarching theme,” whatever that means. (Don’t many collections have a theme? That doesn’t make them novels.) So anyway, it’s a short story collection. Like with many collections, there are going to be stories that stand out, and stories that pale in comparison. All That Man Is starts strong, with one story after another meeting the expectations set by its predecessor. These were such dark, wonderfully written stories. It’s difficult not to ache for the characters, particularly those affected by the male leads. Each story is ruthlessly brilliant.

Not surprisingly, midway the bar was lowered, but that’s not to say that the bar was significantly lowered. Every story in this collection is good, but some, particularly those that open the collection, are amazing. They’re incredibly gritty, yet beautifully heartbreaking. All That Man Is is men at their worst, facing some crisis often brought about by their own insecurity or greed. And Szalay expertly picks these men apart and displays them in a manner few writers could. Certainly, Szalay has proven his worthiness to be on the same playing field as the likes of Munro and other greats of the short form.

Though this is one of my favorites to come out of this year’s Man Booker shortlist, I think the form and unevenness of All That Man Is lessen its chances of claiming the prize. Certainly, the writing and insight are on par with the requirements of the prize, but I don’t think this will be enough to lift it to the top of the pile. Szalay’s collection has better chances, in my opinion, than Eileen or The Sellout, but doesn’t match the epic beauty of Do Not Say We Have Nothing or the cohesiveness of Hot Milk.