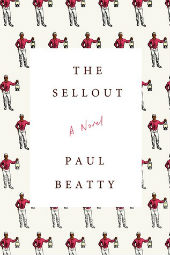 Regrettably, I’m running way behind on my Man Booker reads for this year. Only twelve days remain until the prize is awarded and I still have four books to go. I doubt I’ll be able to get through them all, but I’m still making an attempt to do so.

Of the six contenders, The Sellout was the title I least looked forward to reading. It was billed as the comedic, absurdist addition to the list, and absurdism and I don’t always get along. Five pages in, I was rolling my eyes, dreading the remaining 285 pages. Once the story started to develop and I recognized Beatty’s intelligence and wit, however, I was pulled in.

The Sellout is the story of a black man in California who takes a slave and makes many efforts to segregate his community. It’s a poignant satire that addresses racial identity and its place in film, law, education, and society in general. While many of the observations Beatty makes are difficult to swallow, they are nonetheless insightful. All this is wrapped in a tragicomedic story dripping with sarcasm. Again, not my thing, but I was actually kind of liking this. Although I’m not well-versed in the genre, I think it bears considerable similarity to the work of David Foster Wallace or Adam Levin.

By the end, however, I was exhausted. The irony does wear thin in the final chapters and I believe it wouldn’t have hurt this novel to have been more tightly trimmed in the last seventy pages.

I think it’s unlikely Beatty will take the Man Booker Prize this year. As I stated in my review of Eileen, the Prize will be heavily scrutinized when it finally selects an American author, so I think the year that it finally does will be a year when the American selection is by far the best. Though I have yet to read any of the non-American contenders, I’m confident that one or two will be better candidates. With its relevance to current events and its more tightly woven story, I think The Sellout stands a better chance than Eileen, but I wouldn’t put my money on either. Then again, Bob Dylan just won the Novel Prize for Literature, so all bets are off.